Oracle ran a Social Network Developer Challenge (a “hackathon”) at this year’s OpenWorld conference and TEAM was eager to join in.  The goal of the challenge was “to build something that solves a business problem using Oracle Social Network, its Public API and another service or application”.  We were able to put together a team on fairly short notice and, after batting a few ideas around, decided to pursue an integration with JIRA, an issue and project tracking tool used in-house at TEAM.  After getting to know WebCenter Social, we saw immediate benefits that a JIRA integration could bring, primarily due to the fact that JIRA only allows assignment of an issue to one person at a time.  Integrating Social would allow collaboration and issue resolution to happen right from the JIRA Issue interface.

We centered our use case around a fictitious football league whose fictitious referees were on strike.  The replacement refs used JIRA to review calls made in a recent, controversial matchup between the Seattle Seabirds and Green Bay Packels.   Sound familiar? :)

Our plan went as follows:

Integrating JIRA with Oracle Social Network and the Public API on the JIRA issue level.

We use JIRA at TEAM constantly and while comments within JIRA are available, we often feel it would benefit us to be able to have more collaborative conversations with our peers on certain issues. OSN facilitates that collaboration and problem solving.

Fig. 1: OSN Conversation tab with a button to view an existing conversation 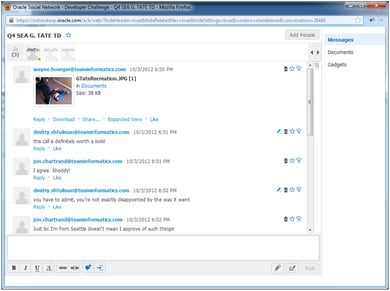 Initially we put a lot of time and effort into a javascript-based integration but couldn’t overcome a cross-browser issue (jsonp and CORS didn’t help us, unfortunately).  When we switched gears to a server-side solution we ran out of time before we could complete the integration.  Although it wasn’t completed in time for the demo, we did generate interest in the concept, at TEAM and externally.  We feel that our concept is close and has some real potential benefits so we will continue pursuing the integration in the coming days and weeks.  We’ll keep you posted on the progress!

TEAM didn’t win the hackathon but with the time constraints of the competition we did pull off an impressive result. If you want to see the Challenge winner’s check them out here.

How to Style an ADF Checkbox

Oct 31, 2016
By: Dwayne Parkinson - Solution Architect In virtually every Records Management environment there is...[...]
Prev
Next